Acuity In The News
Read the latest news about Acuity Insurance.
Acuity Named a Best Employer by Forbes
Share
February 9, 2021 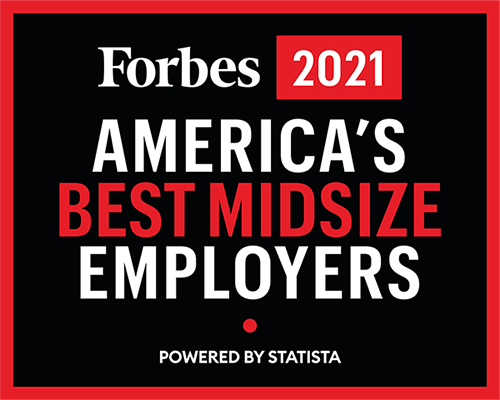 “We are pleased to be recognized among Forbes America’s Best Midsize Employers,” said Ben Salzmann, Acuity President and CEO. “Acuity has worked to build a workplace where people know they are valued and supported, and earning this honor while navigating the challenges of COVID-19 and remote work makes it even more meaningful.”

“We are committed to being a great employer,” said Joan Ravanelli Miller, Acuity General Counsel and Vice President - Human Resources. “Being a workplace people want to be a part of, whether working on-site or remotely, is the foundation of Acuity’s high job satisfaction, low turnover, and industry-leading results.”

America’s Best Employers were selected based on an independent survey where 50,000 employees in 25 different industries working for companies with at least 1,000 people employed in their U.S. locations were asked open-ended questions regarding his/her own employer. The evaluation was based on both direct and indirect recommendations.

In addition to providing employees competitive salaries and professional development opportunity, Acuity offers many work-life integration benefits, generous health insurance benefits, a 401(k) company contribution that has averaged 10.5% over the past five years without a required match, and more. The insurer recently announced it plans to hire 122 people in 2021.

This latest honor adds to Acuity’s continued and growing recognition as a great place to work. Acuity was named to Forbes’ lists of America’s Best-in-State Employers (ranked at #2 in Wisconsin), was ranked #1 in the nation among Glassdoor’s 20 Highest Rated Companies for Work/Life Balance During COVID-19, earned a Glassdoor Employees’ Choice Award for 2021, received the ACORD Millennial Women's Insurance Advancement Award, and was named a Top Entry Level Employer for 2020 by CollegeGrad.com.

Acuity Insurance, headquartered in Sheboygan, Wisconsin, insures over 125,000 businesses, including 300,000 commercial vehicles, and nearly a half million homes and private passenger autos across 29 states. Rated A+ by A.M. Best and S&P, Acuity employs over 1,400 people.